In 2006, when Rob Hopkins moved from Ireland to the small English town of Totnes with his family and co-founded the first Transition Town Initiative in the world with some friends, he surely never imagined what he was starting. Six years on, there are more than 500 “official” Transition Town initiatives in more than 38 countries, and several thousand more are in the process of formation in many cities, towns and regions across the world.1 The model of Transition transcends cultural barriers and languages, and works very well on all levels in between the regional and the personal. It is open enough to inspire people from Brazilian favelas to small towns in Sweden, and it offers enough common features to forge global connections in how these people think and act in their locality. At the same time, it encourages them to adapt their practical work precisely to their local circumstances, making each Transition initiative unique in its features and projects.

What is it that makes the Transition model so attractive for so many extremely different people and cultures? What makes men, women and children get involved in a way that they have often been unaccustomed to, be it in public gardening projects, relearning forgotten cultural practices, re-imagining transportation and energy groups, or sharing their tools and knowledge? The answer might lie in the roots of the movement.

The transition movement often refers to itself as the “head, heart and hands” of the energy and cultural transition. With that comes the importance of maintaining a balance between these three components, so that none outweighs the others. The “head” refers to scientific and mental conclusions and facts that inspired Hopkins and his collaborators to establish the first Transition Town in Totnes. It includes the insight that the present Western lifestyle is not sustainable, particularly when looking at it with an awareness of Peak Oil (and other resources peaking), climate change and global justice in resource use.

Rather than preaching a doomsday scenario, the Transition movement considers these negative developments to be an opportunity – especially for the West – to significantly increase our quality of life immediately, by transitioning to a gentler way of life based on greater sharing of resource use and better cooperation. That involves recognizing that people can actually improve their quality of life by forsaking many of the goods and habits that they have grown to love, and that resistance to change is often born out of fear of loss and/or laziness. The tangible gains could include, for example:

Some of these elements are part of the Transition Movement’s “heart,” or the so-called “inner Transition.” For example, in an “inner Transition” group people might investigate together which of our “inner mechanisms” actually encourage us to create our external industrial growth model, which so often inflicts harm on our environment and our inner well-being. Another aspect of this work might be to examine how one’s group can collaborate well and deal constructively with feelings of desperation and powerlessness, posed by overwhelming, “big” challenges. A first, important step might be simply to recognize those emotions and then to find wise and appropriate ways of dealing with them.

The “head,” “heart” and the “hands” of the Transition movement draw further upon deep ecology approaches developed by Joanna Macy (“the work that reconnects”) as well as the theories and practice of permaculture. “Permanent agriculture” was developed in the 1970s during the first oil crisis and pursues principles basic to every Transition initiative: observing and interaction; capturing and storing energy; generating and harvesting yields; creating self-regulating cycles and accepting feedback; using and valuing renewable resources and services, and not producing waste; integrating instead of separating; prioritizing small and slow solutions; appreciating diversity; paying attention to border zones; and responding creatively to change.

In further developing a Transition initiative, it is equally important to anchor both the “head” and the “heart” as concretely as possible in actions on the ground, be they neighborhood meetings, art or food projects, a reskilling workshop or regional currencies. There is no need to reinvent the wheel though; close exchange and cooperation with already existing initiatives will often do the job and create very rewarding new connections.

Powerful adoption of the transition model

Why has the Transition movement had such deep cultural resonances now? Haven’t community gardens, discussion groups and places to share and exchange things been around for a long time? These questions have not yet been fully answered, and perhaps never will. Presumably the strong embrace of many Transition initiatives adoptions has to do with the fact that compared with some existing movements and political groupings, the Transition model offers some fresh approaches. For example, it often encourages those people who previously just sympathized passively with “green” topics to become actively involved (in many cases, for the first time in their lives!). The Transition movement also offers a vision of a better future – developed in partnership between activists and people in their local community – that speaks to the needs of everyone, whoever and wherever they are. The efforts try to include people as they are, respecting and valuing whatever particular wisdom, creativity and talents they may have. The Transition approach is non-ideological and pragmatic, reflecting the motto: “There’s already all the necessary creativity, genius and knowledge in the people in our neighborhood to solve our local problems with ingenious, creative and quality- of-life improving projects, while decreasing resource consumption and increasing our quality of life. How wonderful to finally be able to connect with them!”

Living with less (fossil-fuel-based) energy will probably be unavoidable in the future. Transition initiatives believe that it is better to plan for that, rather than to be shocked and surprised by it. The Transition approach that “the (local) solution will be just as big as the (local) problem” self-empowers us. A lot of positive energy emerges from the Transition model and its projects, which are often “contagious.” They inspire people with enthusiasm and common sense, and are easily replicated. And all this while strengthening the resilience2 we so urgently need.

Another key realization of Transition and related movements is, “We ourselves must act, and we must act now.” Waiting for governments and institutions to decide and act for us will simply not cut it. Another very positive result of this approach is that when people do get actively involved, they often escape feelings of powerlessness. “I’m just one person and whatever I do doesn’t matter” is replaced by “Whatever I do in partnership with others transforms the whole.”

Many people perceive their connections within a Transition initiative to be enriching. They also cherish the idea that Transition is still a big experiment whose outcome is uncertain. Nobody knows the answer because the answer simply doesn’t exist. Thus the “cheerful disclaimer” on the Transition network websites and books that emphasizes the experimental approach of Transition.

If one were to spell out the Transition model from A to Z, we would have just reached the letter C in terms of its potential. There’s still plenty to develop and we all are needed to fill the Transition model with life and our visions. One area of further challenge is certainly to look closer into the many principles and practices the commons and Transition share. They are like natural fellows and very much at ease with each other. Thus it will be most inspiring to see how more and more Transition and commons projects globally overlap and thrive together in a most joyful and life-enriching way. 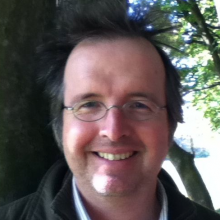 Gerd Wessling (Germany) is a physicist with long-term connections to places like Auroville (India), Schumacher College (UK) and Totnes (UK). He is Co-Founder of Transition Town Bielefeld and of Transition Netzwerk D/A/CH (Germany/Austria/ Switzerland). As a certified Transition Trainer he is leading Europe wide Transition workshops. He facilitates courses at Schumacher College. http://www.transition-initiativen.de.